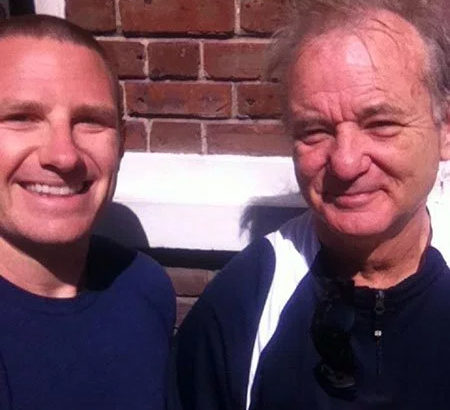 We’d like to thank Harry for sharing this story!

When living in Charleston, SC, it’s almost guaranteed you’ll run into Bill Murray at some point. My 5-year-old son, Holden, and I decided to quicken our chance meeting and go on Ghostbuster scavenger hunts. Our first encounter was a tip from a friend of mine. We hopped in the car and went to a local Wellness Center where he had had a Reiki session. We went in but he was asleep on the couch. Feeling a little deflated, we went back to our scavenger hunts.

It wasn’t until about two weeks later, I walked in to my favorite coffee shop one morning, and sitting on the sofas next to my seat was Bill. He looked rough at 8am. I didn’t bother him until he was leaving.

I ran up to him and asked for a photo for my son. He looked at me and said “Outside.” He didn’t seem too happy to take the photo but obliged anyway. I explained it was for my son and how it would make his day. The photo was taken and I said thank you.

Three weeks later, I’m at SXSW in Austin, TX. My sister and I happened to finagle our way into a small club show that featured Jack White. It was a 400-person venue and half of them were celebrities. With the bourbons flowing like wine and a 20 min span in which I heard Jack White play “Slowly Turning Into You” and I met and hugged John C Reilly, another thing occurred. Coming around my side was Bill Murray. I didn’t say anything having already met him.

But, to my surprise, Jason Sudeikis from SNL is standing next to me calling for Bill. Bill turns around and recognizes ME! He never turns to Jason. He smiled at me, I simply told him thank you for the picture, and that it had made my son smile so big. He smiled warmly at me and walked away, never even noticing Jason. As a consolation, I looked at Jason and said, “You’re great on East Bound and Down“. He did not look amused.

As the night continued and Jack White played Seven Nation Army, I look over at the bar and see a guy dancing on it. It was Bill. The entire bar was shocked and ecstatic that all of it was happening and it quickly became Twitter legend It continues to be one of my favorite concert experiences.

4 thoughts to “Charleston to Austin: A Remembrance”