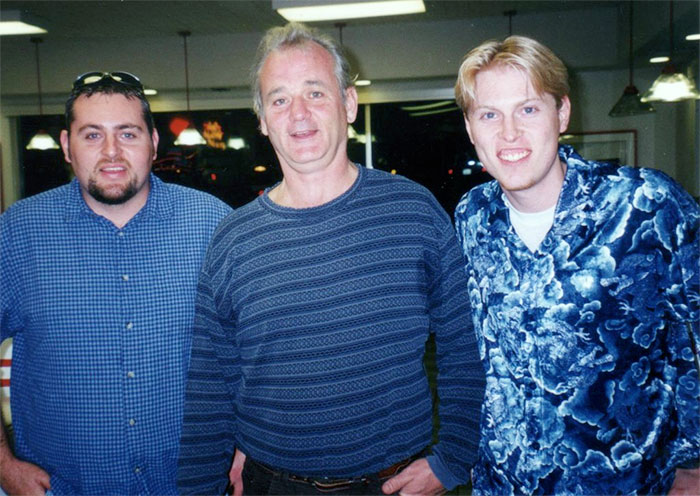 We’d like to thank Adam Smeaton for sharing this story.

In 1998, I packed my life into my Nissan 240SX and hit the road to California with dreams of becoming a rock star. My brother Josh was cool enough to make the cross country drive with me. It was an exciting trip, with America whizzing past me and visions of my new life in Los Angeles firing through my synapses.

The second day we were in L.A., we went to the In-N-Out Burger on Sunset. (There’s a rule that all new arrivals have to go there). Right when we sat down with our food, Josh did a double take. He finally leaned forward and whispered, “That’s Bill Murray.” Of course Josh was so excited that it was more like a shout straining with the hoarseness of a whisper.

I looked over my shoulder, expecting to see someone vaguely (but not at all) resembling Bill Murray. But sure enough, Bill Murray, comedy God, was standing in line, waiting to order his double double. Without missing a beat, Josh went over to him and told him that he’s a fan. He then asked Bill if he would mind taking a photo with us. Bill said he’d be glad to – success! Josh told him he had to go back out to the car to get the camera. Bill said, “No problem. I’ll be right here.”

So as Josh went to retrieve the camera from the car, Bill came over to the booth and sat down with me. We started talking about something, but for the life of me I can’t remember what. My thoughts were “holy crap that’s Bill Murray be cool holy crap that’s Bill Murray oh wow wait is he asking me something holy crap Caddyshack Ghostbusters Groundhog Day no one will believe this I don’t believe this”.

What I do remember is that, out of nowhere, he nonchalantly started eating my French fries without asking, which I thought was so Bill Murray! BILL FRICKING MURRAY is eating my fries!!!!

Josh came back with the camera, and Bill – that’s right, he was “Bill” to me by this point – took a few more minutes to hang out and B.S. with us. We told him about our cross-country road trip and that I’d just moved out here. He asked me why I’d moved to L.A. I told him that I was a drummer and that I came here to break into the music business. He wished me luck and told me he was sure it would happen for me.

In case you’re skeptical that this actually happened, I give you Exhibit “A.” You can see from this photo that Josh, Bill and I were magically color coordinated that day, clearly a sign that this encounter was meant to be. Of the three of us I’d have to say that my shirt is the most fashionable (for 1998), and is sure to come back in style any day now.

As for Bill’s prediction about my career trajectory? Fast-forward a hop skip and jump (and 16 years). I have a song with Mark Victor, a.k.a. Ca$hizz Clay, in the new movie St. Vincent, starring my dining companion Bill Murray. The song, “You Da One”, is on the soundtrack to the movie, which is now available on iTunes. (That’s right, I’m working a plug into this story.)

St. Vincent is now playing nationwide. I saw it a few weeks ago and loved it. Bill is of course great in it.

And Bill: Thanks for sitting down with my brother and me, and thanks for the encouragement. Those were the best damn French fries of my life.

4 thoughts to “Best Damn French Fries Of My Life”