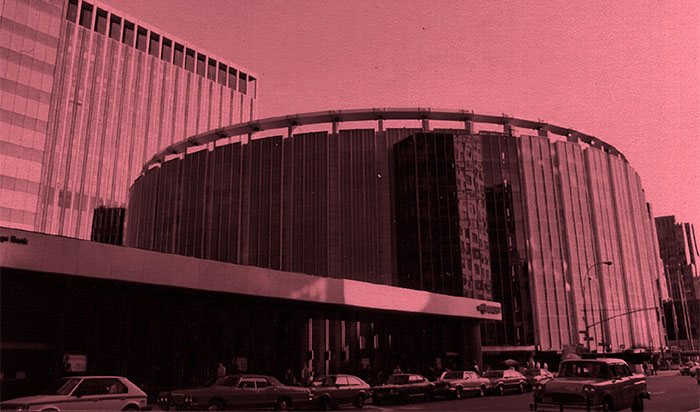 We’d like to thank Andrew Arnett for sharing this story

I was at Madison Square Garden to see The Police with my friend Pete. We had tickets in the blue section, or “Blue Heaven” as it was referred to, because it was all the way back and up. From there the stage looked like a matchbox and the entertainers like ants. We agreed the situation was unacceptable and, while the Go Go’s played their opening set, decided to make our move.

We dropped down the wall into green section, snuck by the guard into yellow section, hopped over a small rail to get into orange then, there it was – red section splayed out in front of us like the promised land, with the front row beckoning.

There was only one problem. The entire perimeter of red section was heavily patrolled by security. I cautioned Pete. I suggested we hunker down in orange for a while, at least until the Go Go’s played “Our Lips Are Sealed”, and then wait for an opening.

Pete remained gung ho and wouldn’t have it. Pete was a huge Stewart Copeland fan; he wanted to cop those drum moves up close. Before I could stop him, he said “I’m going for it,” then took off in a dash. I was right behind him.

For a moment, everything seemed all right. We were melding into the crowd. Everyone was excited, rocking out. Then, there was a hand on my shoulder.

They got Pete as well. We were escorted to a section to the side of the stage. A bunch of security people gave us some warnings, asked for our tickets, tore them in the corner, and handed them back to us. Then they escorted us all the way back to blue section.

Pete and I sat there for a while, languishing to the rhythms of “We Got the Beat.”

“Let’s go for it again,” Pete told me. It seemed like the right thing to do. We were really so very close that first time. So we dropped down the wall into green, snuck by the guard into yellow, hopped over the rail into orange and, then, we were at red section again.

Most people would have been satisfied with our position but at this point it seemed like a mission, like climbing Everest or something. Pete leaped into red like a jackrabbit over the road.

I was right behind him but security was on us like a net. This time they weren’t so understanding.

After verifying that this was our second offense, we were taken behind the stage to a group of awaiting NYPD officers. These were the real ones, not the rent-a-cops we had been dealing with.

There was a group of eight officers, and they escorted us to the service elevator. While we waited for the elevator, the cops taunted us, telling us we were in big trouble. The mood was grave, and we anticipated a beat down.

Then the elevator door opened and Bill Murray walked out.

We worshipped Bill. We started yelling out “Save us Bill, save us!”

He didn’t say anything but, before walking away, gave us a smile like his Hunter Thompson character would do in Where the Buffalo Roam.

That look changed everything. We were no longer morbidly fearful. We were elated, we felt graced. The cops didn’t know what to make of the situation – the atmosphere of intimidation completely evaporated.

Down in the basement of Madison Square Garden, the cops formed a circle around Pete and I.

“Look, I’ll take my badge off,” he offered as he removed it from his uniform.

Pete and I didn’t make a move and, a few moments later, they told us to scram. So we left the building by the side entrance.

There was no doubt in our minds that, if Bill Murray didn’t show up at that fateful moment, something horrible would have befallen us. Bill Murray saved our lives.