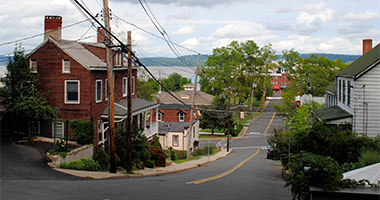 The following story was shared by Linda Epstein.

I was driving around Nyack, New York one sunny afternoon with a very opinionated friend. We were chatting about Saturday Night Live because my dad had been the manager of guest relations at NBC and I was lucky enough to see many performances during the first several years of the show.

My friend vehemently announced “I HATE Bill Murray.” I said “What? How can you possibly ‘hate’ him? You don’t know him; he’s not controversial, he’s not offensive in any way. I don’t get it.”

This began a lively ‘disagreement’, which lasted at least ten annoying minutes, as we continued driving along the Hudson River in Piermont. I was aiming towards a winding road past Tallman Mountain Park that would lead us down toward the river. We changed subjects and slowly fell into silence, enjoying the ride.

The road I was on tapered completely until it became a one-lane gravel mess with a convertible approaching us at a very slow speed. As in a game of ‘chicken’, one of us had to stop completely in order to allow the other to come through. I stopped. The car came toward us. Blind as I am, it took a few moments for my friend and I to focus and then realize the driver of the oncoming car was Bill Murray.