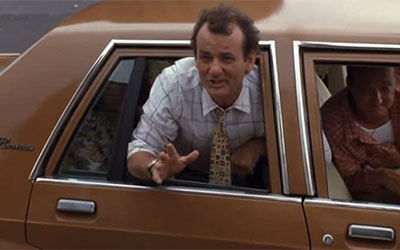 We’d like to thank Kamian (Mikki) Allen for today’s story – Which just so happens to be the 100th posted on this site.

As an 11-year-old, I met Bill Murray while he was filming Quick Change in the Chelsea neighborhood of Manhattan. My family had just moved to NY so that my father could attend seminary and I was blown away to live on a block where a movie with Bill Murray was being filmed.

I hung around the set for days and, after seeing Bill a few times and getting his autograph, I begged him to come with me on a tour of the grounds of my father’s school. Bill graciously agreed, but tragedy struck when I realized I’d forgotten the “master” key to get inside of each of the different buildings on campus. All I could do was walk him up to the different doors and tell him how awesome it was inside. He was patient and super funny about it, spending about 30 minutes on my lame tour.

My family thought that the story was ridiculous and, when my sister found an open casting call for a young girl to play Harrison Ford’s daughter in a film, she thought maybe I’d try my luck meeting Harrison. Thanks to my experience with Bill Murray, I actually went to the casting call on my own and wound up (after a lot of auditions) co-starring in J.J. Abram’s first film, Regarding Henry (directed by Mike Nichols) as the daughter of Harrison Ford and Annette Bening.

Bill Murray is one of the greatest people I’ve ever met and he completely changed my life.