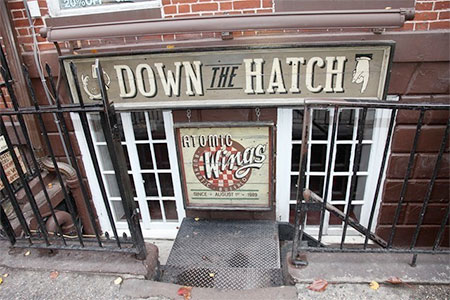 The following story was shared by navkat.

I saw the script for a new GB movie once – I was having drinks and wings at Down The Hatch on W. 4th in the West Village in NY.

Bill Murray came in and ordered a basket of Suicidal wings and a scotch, neat. He was carrying a manuscript under his arm, which he laid on the seat next to him. I wanted to say hello but I didn’t want to seem starstruck so I just smiled and waved my drink at him.

As the night progressed, he ordered more drinks and more wings. At some point, as is usually the case at DTH, with his hands covered in wing sauce, Bill Murray ran out of napkins. After a couple of halfhearted attempts at getting the bartender’s attention, Mr. Murray began tearing pages off the top of the manuscript next to him and using them to wipe his hands. Odd, but not altogether crazy.

After a few drinks of my own, I finally mustered the courage to approach him and offer to buy him a round. Before I could get the words out of my mouth, however, Mr. Murray grabbed me by my wrist, pulled me towards him and said “You’ve got something…a bit of schmutz right…there.” He then tore a page off the top of that manuscript and wiped something off the corner of my mouth.

I thanked him and unsure of what to say after that, I cast my eyes towards the pile of crumpled-up pages and napkins on the bar beside us. It was then that a watermark on each page caught my eye: “Ghostbusters 3: Back In Business.”

Bill must’ve seen a change of expression on my face because at this point, he pulled me closer, leaned over and whispered in my ear “No one will *ever* believe you.“