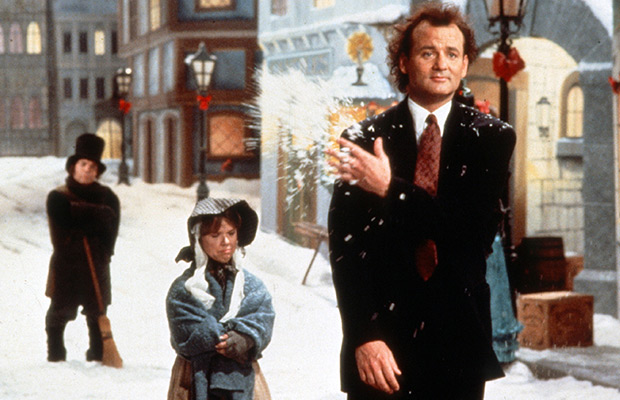 From Scandal: A Manual, the memoir of George Rush and Joanna Molloy, whose syndicated column, Rush & Molloy, ran in the New York Daily News for 15 years.

Over the years, we’d heard – usually from paparazzi – that Bill Murray could be a jerk. But we’d also heard he had another side. An old friend of Joanna’s told her she had been out shopping with her two kids one Christmas eve when her little boy called out, “Mama, mama, it’s Ghostbusters!”

At the end of the store’s aisle was Bill Murray.

The mortified mom grabbed her kids and left. She’d just loaded her children into her Jaguar when Murray came knocking on the window. He let himself into the car, sat down, and apologized. He said he’d had an argument with his wife.

As it happened, Joanna’s friend had just a had fight with her husband. Murray asked if he could make it up to everyone by taking them to dinner. The kids yelled, “Yes!”

So they all went off to the Tribeca Grill. He was quite entertaining.

“I hope you’re not sore at me anymore,” Murray said.

“I’ll let you live,” joked the attractive lady as they went their separate ways.

Murray smiled. Little did he know that the woman who’d spared him was Joanna’s pal, Joanne Persico.

Not until Murray read the Rush & Molloy column did he learn that his pretty dinner companion, Joanne, was the daughter of Colombo capo Thomas Petrizzo and daughter-in-law of Colombo godfather Carmine (Junior) Persico.