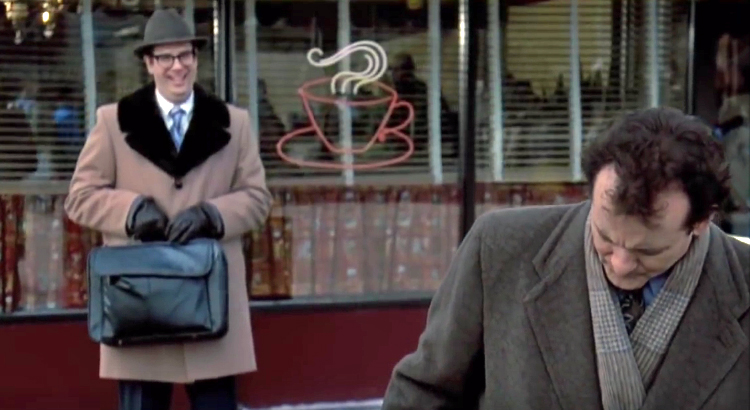 We’d like to thank Dave for sharing this story.

I had jury duty while they were filming Groundhog Day in Woodstock. Because of my wife’s job I was unable to serve, but still had to show up each morning and again at the end of the court day. So I would wander around Woodstock during the day, And on the first day who do I see standing right outside his trailer? Bill Murray.

So I walked right up to him and gave him a friendly greeting. He was very pleasant and we talked (don’t really recall about what) for a good ten minutes or so, until he got called on to set. Bill nicely invited me to hang around and watch them filming (which I probably could of done anyway, but nice of him). I watched them film quite a few scenes, including seeing him do the stepping in the puddle bit about a million times.

Until the court stuff was over, I continued to hang around the set each day and watch them film. I saw Bill several other times; we exchanged glances and talked again briefly a few other times. Wish I was smart enough to bring a camera or get an autograph.