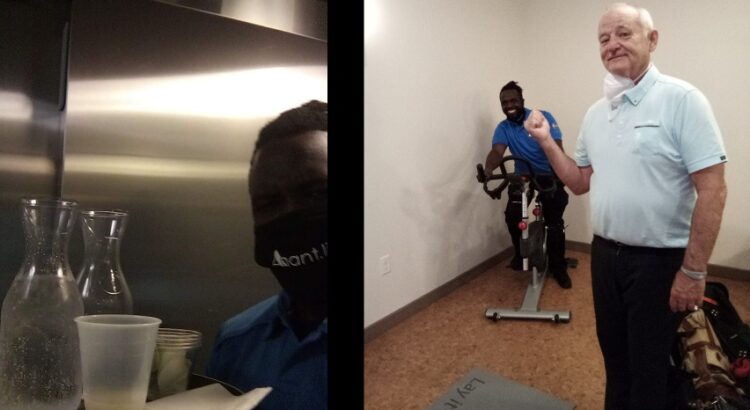 We’d like to thank Charles for sharing this story.

So I’m tending bar at a new gig and it’s my first week. “Heads up, be on your best behavior, corporate will be here.”

“Because Bill Murray’s going to be here.”

Whhhattt — okay you should have lead with that.

It’s November 6th in Omaha Nebraska, 5PM at the EVEN hotel. My training supervisor and my boss had me run the lobby bar, while they worked the event where Bill Murray, Warren Buffet, and Tom Osborne held an auction for a Teammates (don’t quote me) program they were starting. So I was already living with the notion I wouldn’t meet him.

As I’m walking through the lobby around 6PM, I see an entourage coming down the stairs. I am a very tactful, stoic, and “mind my own” type of person, so I only glanced and kept to doing my job. As I stand leaning on my bar, texting with nothing to do (ironically), I hear a sudden “Excuse me sir. Hang on to this ’til tha moanin will ya?” I turn around and this tall, unrecognizable guy hands me a tip and quickly walks away.

Mind you this is in the midst of the pandemic, so masks are worn everywhere.

I take it but only realize the perp until he’s walking out the lobby doors with his group. I tell my co-workers and guests who come to the bar.

So, later that night, I kid you not… Walking up the stairs with 2 ladies, he does it again, muttering the same exact, “Excuse me sir. Hang on to this ’til tha moanin will ya?”, handing me the same exact tip from earlier. I was by myself at the bar and it was a slow day, so no one witnessed it.

I have told several guests who have came to my bar about what happened and who is staying at the hotel. He was out at the time getting clout at a Zen coffee shop making Facebook headlines. One particular couple was hanging out at the bar the whole night with me, so I told them to watch out for his return.

The lady says, “Oh just you wait, I’m gonna tell him, ‘Hey Bill Murray — you — you just think you’re some big shot don’t ya — well I’ll (something, something, something blah blah blah)'”. Sure enough, in comes Bill Murray with his two girls. It’s DEAD silent. There were about 7 people at the bar and no one said a word. I shared a fellow nod to the legend.

So here’s the juicy:

My co-workers strolls over to me and tells me there’s a call for me on the lobby phone.

“I need a pitcher of Tequila, club soda, and lime juice to my room STAT.”

So I prepare the order, tell my patrons what I’m about to go do, and they are all in shock! I squeeze some fresh limes, get my pitchers together, and headed on up.

I knock. On the floor is a book from one of my co-workers (RIP) who wanted to gift Bill with some knowledge about Omaha. I picked it up. He opened the door.

Chaz: Hey, this was in front of your door.

Chaz: Well I (something, something – BOYSCOUT – something blah blah blah)

He hands me a wad for my tip. I set the drinks down on the table.

BM (holding the book upside down): Anything useful in here Chaz? Anything I should know about?

So here I am, hanging with Bill Murray, a chummy-gleeful-stutterful sweat cloud. A rainbow probably spread when I left the room.

The girls with him were pretty chill. They would visit the bar and get drinks every now and then. BM was watching a Chicago team (cannot recall) play some game, maybe just highlights, kind of going back and forth between various activities. I was literally tripping over golf balls and clubs on the floor.

Of course, I had to ask to get the picture. He said “get on the bike” (at least my sweat is justified now) and one of his girls took the picture. I told my big brother about him the night before and he made me promise to get a picture if I saw him again. He was a big fan of BM, and, to this day, still has several of his movies on VHS. Me? Well kids, do your homework.

BM has his back turned towards me doing who knows what; he was all over the place, like he had things to do.

BM turns just enough to lock his peripheral on me

BM: Man, well I guess I’ll toss this back.

He goes to retrieve the tossed item, the highest valued tip I ever received. It is an autographed DVD of Caddy Shack! I promised him I would watch it, so he agreed to give it to me. Now something so BM happened…

BM: Chaz, if I need to get a hold of ya, how do I go about doing that?

I tried to keep to my normal cool, and give a response that may contrast what one might expect

Chaz: You have to call the front desk.

I am literally dumfounded, like BM is not asking for my number.

Chaz: I could… give youuuu myyy… nummmmmber??

Bill Murray literally slammed the door in my face. “Huh”, I pondered. I know he didn’t want my number. Typical BM I guess! Plus 2 GREAT TIPS? Wanna slam that again on me? Harder??

What a story – one I’ll never forget. Fun fact: You can see the golf clubs and bags in the bottom-right corner of the picture! All of our rooms have exercise equipment in them, and our suites have in-home bikes in them.