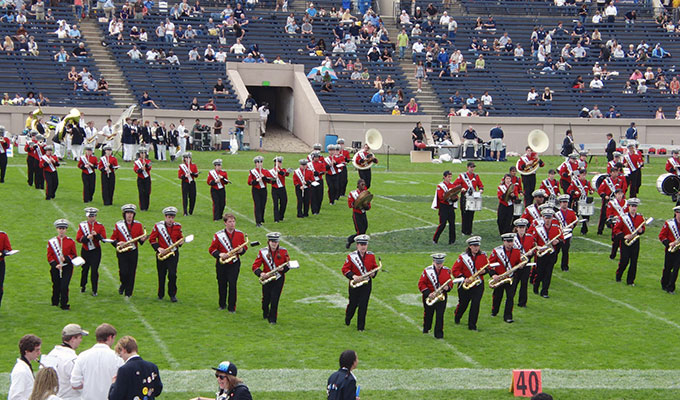 We’d like to thank Cashel for sharing this story

October 2011: Ithacans have a surprising encounter with the legendary actor Bill Murray.

Unbeknownst to the majority of the Cornell-Harvard football game spectators, Bill Murray was anonymously, secretively in attendance. Per usual, at the end of the game, the Cornell marching band stuck around to jam and play a few sets. I was just a high school student at the time and found myself tossing around a football on the field after the game. I noticed the band yipping and cheering for seemingly no reason, so I walked over, joining a crowd of shako-wearing, brass-wielding college students.

Atop a podium where typically a band master would stand to conduct, stood Bill Murray in salmon-pink trousers swinging a red jacket about, mock-conducting the band, likely with little to no experience doing such a thing. He had a jaunty attitude that embodied the word ‘pep’ in pep band. It came to my attention that the Ghostbusters theme song was what instigated Bill’s interest in entertaining the band. He had come out of nowhere into plain sight to treat everyone who hung around after the game to witness. We were a lucky bunch that saw Bill that day.

I had known Bill Murray from his Wes Anderson roles and his time on SNL, but didn’t delve much into his social life. Well, this occasion was more than an acquaintance with Bill Murray’s social life; it showed me exactly how free-spirited and unrestrained he was and still is. It’s evident he spends his days making others’ days.