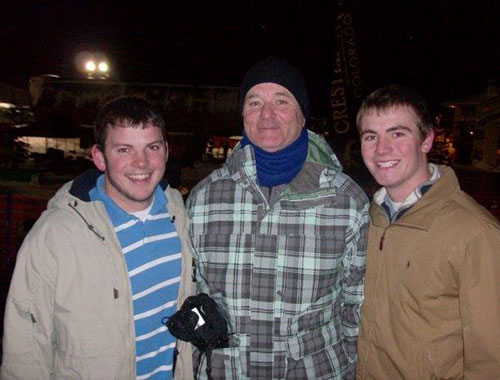 We’d like to thank Caleb Davis for the following story.

It was New Years 2009 in Crested Butte, Colorado. A few friends and I were skiing and partaking in various shenanigans when we decided to head out for some New Years Eve fireworks and festivities.

The temperature was 5 degrees, but felt even less. It quickly became apparent that fireworks are not that fun when the weather is so cold, so we decided to head to a warm, cozy bar instead. Right as we were about to leave, one of my friends realized there was something familiar about a gentleman standing about 20 yards away from us, eventually deciding “Dudes, that’s Bill Murray over there“.

Of course no one believed him at first. We were freezing our asses off, so to say we were skeptical would be an understatement. But he urged us all to take a look. Sure enough, bundled up and glowing like some kind of angel, was Bill Murray just chilling with what looked to be his son.

At this point, we were all jumping around like some 13-year-old girls on their way to a Justin Bieber concert. This is Bill Murray – Caddy Shack, Groundhog Day, What About fucking Bob, Kingpin… Big Ern McCrackin!

However we were still freezing our asses off. Half of the group wanted to call it a night, figuring that it was enough to be able to say we saw him. But, as the saying goes, “no one is EVER going to believe you” without proof.

So I eventually got up the nerve to go over and say “Hey Mr. Murray!” I told him how much of a huge fan I was and that I basically love the guy. Then he turned to meet the only other friend that came with me, but all he can muster is “Gunga-gulunga”. Bill cracked up. We asked for a picture and, of course, he agreed; only saying “Suck in the gut, fellas” right before the picture was taken.

Thanks for a great memory Bill!